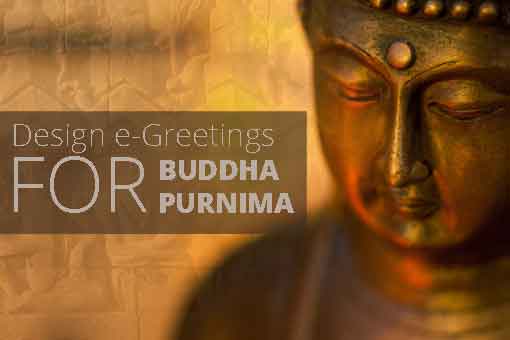 MyGov invites its users to design e-Greeting cards on the occasion of Buddha Purnima, also known as Vesak. The festival marks the birth and enlightenment of Gautama Buddha. He was the epitome of Dharma, and propounded the principles of Golden Mean & The Middle Path.
The last date of submission is 19th May, 11:00 am.
Terms and Conditions
1. Submissions should be in the portrait layout with the size 10x12cm. Designs in any other size and layout would not be considered.
2. All designs shortlisted by the Standing Committee, after eliminating unsuitable entries, would be published on the portal.
3. Based on actual usage, (i.e. citizen’s choice/acceptability) over the period 20th May, 2016 – 5th June, 2016, top 3 designs will be rewarded with a cash prize of Rs. 10,000/-, Rs. 7,500/- and Rs. 5,000/- respectively.
4. Subsequently, only the top 5 most used designs will be retained on the portal.
5. Entries should be original. Individuals submitting copied entries would not be considered for future contests.
Disclaimer: All efforts will be made by the Standing Committee to check for originality of the submissions, however MyGov and e-Greetings portal will not be held accountable for any submission identified as a copy.

This website uses cookies to improve your experience while you navigate through the website. Out of these, the cookies that are categorized as necessary are stored on your browser as they are essential for the working of basic functionalities of the website. We also use third-party cookies that help us analyze and understand how you use this website. These cookies will be stored in your browser only with your consent. You also have the option to opt-out of these cookies. But opting out of some of these cookies may affect your browsing experience.
Necessary Always Enabled
Necessary cookies are absolutely essential for the website to function properly. This category only includes cookies that ensures basic functionalities and security features of the website. These cookies do not store any personal information.
Non-necessary
Any cookies that may not be particularly necessary for the website to function and is used specifically to collect user personal data via analytics, ads, other embedded contents are termed as non-necessary cookies. It is mandatory to procure user consent prior to running these cookies on your website.
SAVE & ACCEPT