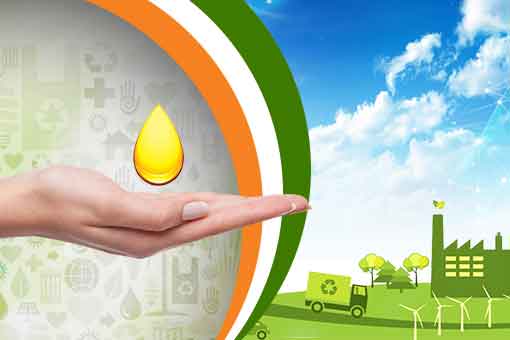 Background of Oil and Gas Conservation Fortnight
PCRA was established in the year 1978 under the aegis of Ministry of Petroleum & Natural Gas with a vision “To become a Centre of Excellence for Conservation of Hydrocarbons & Environment Protection for Sustainable Development”. For the past many years PCRA Celebrates Oil & Gas Conservation Fortnight (OGCF) from 16th -31st January every year. This year theme of the OGCF is clean fuel and creating awareness about the clean fuel among the masses. In India, bio-mass is used on a large scale as domestic fuel, particularly in rural areas. This has an adverse impact on environment with higher GHG emission contributing to climate change. Kerosene, LPG, PNG, bio gas are other fuels used as a domestic fuel by the people. Though solar and wind are the cleanest source of energy available. So far, there are certain limitations in using them as a domestic fuel. As such, it is important to educate masses about using cleaner fuels. When compared with bio-mass, LPG has calorific value of 11800 KCAL/KG against 3800 to 4000 KCAL/KG of wood. Moreover, high polluting fuel (Wood/Agricultural Waste) is consistently associated with Acute Lower Respiratory Infection (ALRI) and fever. Half of the world’s population uses solid fuel for energy and cooking resulting in 1.5 million deaths annually, approximately one third of which occur in India alone. More deaths are linked to childhood pneumonia or acute lower respiratory tract infection.
Women who cook over solid fuel stoves are 3.2 times more likely to develop COPD (Chronic Obstructive Pulmonary disease), 1.9 times more likely to develop lung cancer, 3 times more likely to have TB and 2 times more likely to experience still births, over women who use cleaner fuels. Hence, it is important that the people are made aware and educated to use LPG as a substitute to bio-mass. Bio-gas is another useful fuel which can be promoted in rural areas.
Natural gas is cleaner than LPG, as its emissions are lower than equivalent quantity of LPG. However, natural gas is available in the form of PNG in limited cities of the country where people are required to be educated for shifting to use of PNG from LPG. Similarly, in the transport sector, CNG is much cleaner fuel compared to petrol/diesel. Awareness campaign for using CNG is required in places where it is available.
Keeping this in view, participants are requested to suggest Tagline for the campaign to be taken up during OGCF about using cleaner fuel across the country.
The winners of the contest will be awarded cash prizes as follows:
1. First Prize: Rs. 10,000/-
2. Second Prize: Rs. 5, 000/-
3. Third Prize: Rs. 3,000/-
Last date of submission is 21st December, 2015.
Tagline Contest for Oil and Gas Conservation Fortnight (OGCF) Terms and Conditions

This website uses cookies to improve your experience while you navigate through the website. Out of these, the cookies that are categorized as necessary are stored on your browser as they are essential for the working of basic functionalities of the website. We also use third-party cookies that help us analyze and understand how you use this website. These cookies will be stored in your browser only with your consent. You also have the option to opt-out of these cookies. But opting out of some of these cookies may affect your browsing experience.
Necessary Always Enabled
Necessary cookies are absolutely essential for the website to function properly. This category only includes cookies that ensures basic functionalities and security features of the website. These cookies do not store any personal information.
Non-necessary
Any cookies that may not be particularly necessary for the website to function and is used specifically to collect user personal data via analytics, ads, other embedded contents are termed as non-necessary cookies. It is mandatory to procure user consent prior to running these cookies on your website.
SAVE & ACCEPT